This is a review and detailed measurements of the SMSL SP400 balanced THX headphone amplifier. It was kindly sent to me by one of their dealers, shenzhenaudio. It costs US $630 from them.

The SP400 makes an attempt at luxury with glossy plexiglass top and digital display: 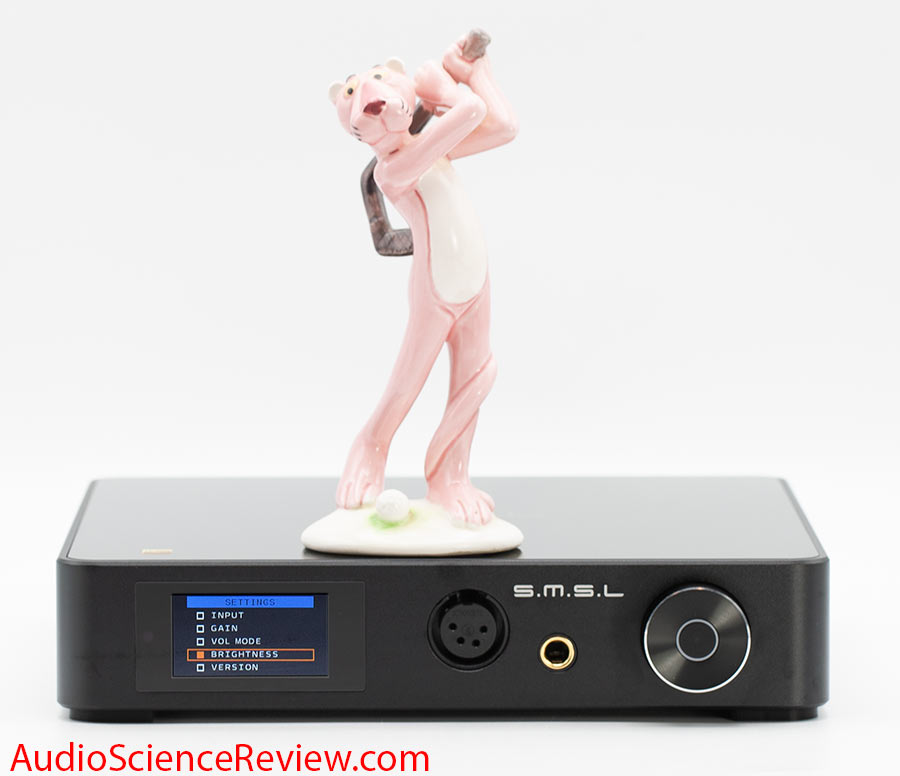 As you see, there are no controls on SP400. Everything is menu driven including input selection and gain. If you use multiple headphones with different gain requirements, having to switch that using the menu can be a bit of a hassle. Fortunately there is a mitigating factor as you will see in the measurements.

One main distinguishing feature is that there is remote control and relay based R2R implementation. This should assure very good channel balance -- something that we will check later. It costs a lot to implement this feature though and that is reflected in the cost.

Forgot the picture of the back:

SMSL SP400 Measurements
As usual with balanced input amps, let's feed the SP400 4 volts over its XLR input and ask for the same output over 1/4 HP jack: 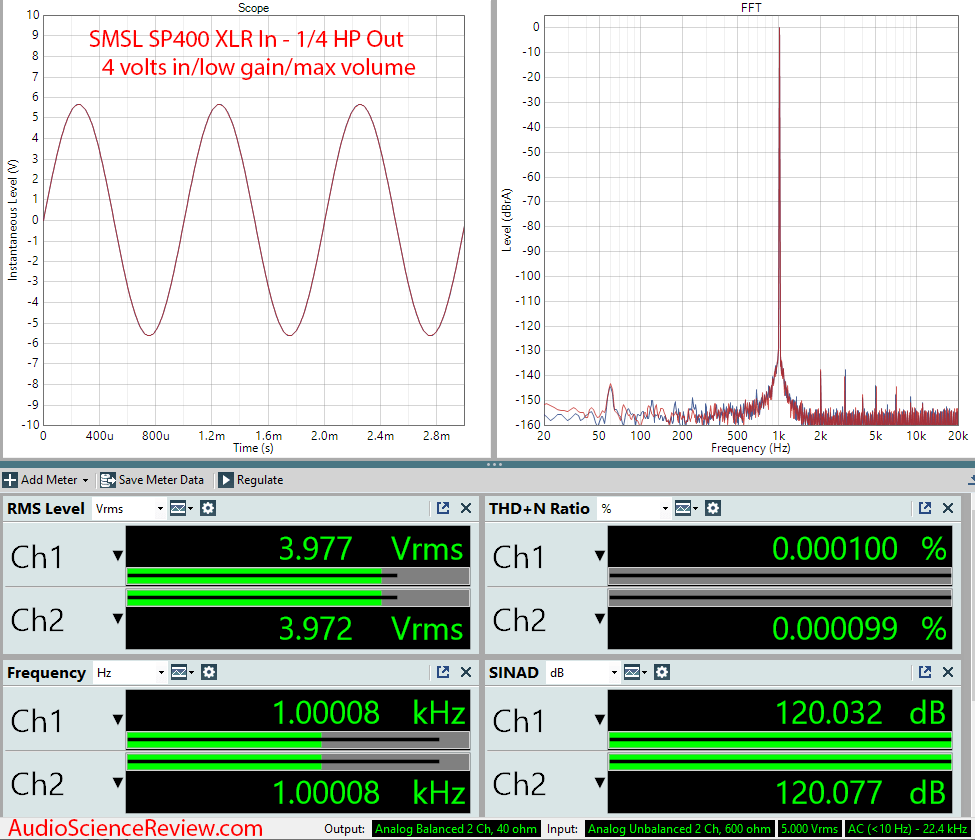 Distortion is stunningly low at nearly -140 dB so noise dominates our SINAD to the tune of 120: 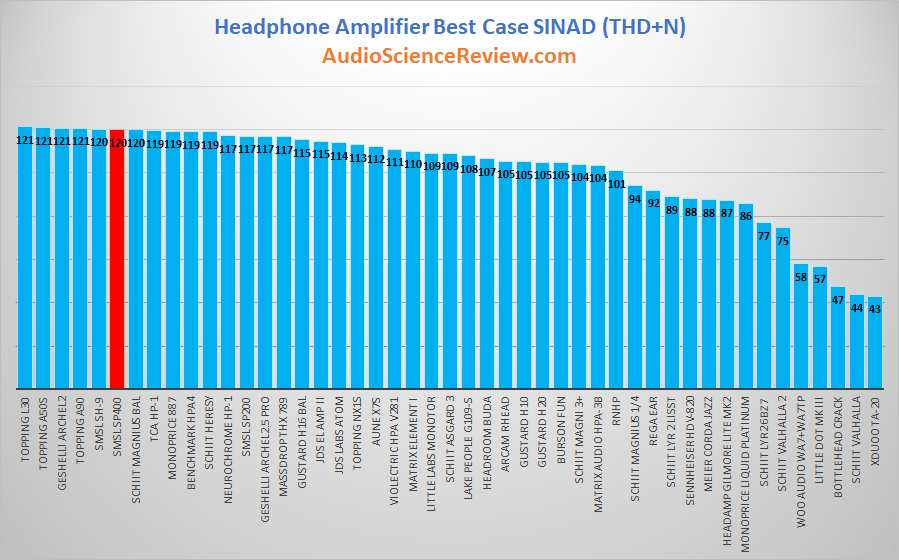 Please don't sweat one or two dB in this graph. That said, signal to noise ratio for low 50 mv output is a bit lower than it should be:

Frequency response is of course rule flat to beyond 100 kHz: 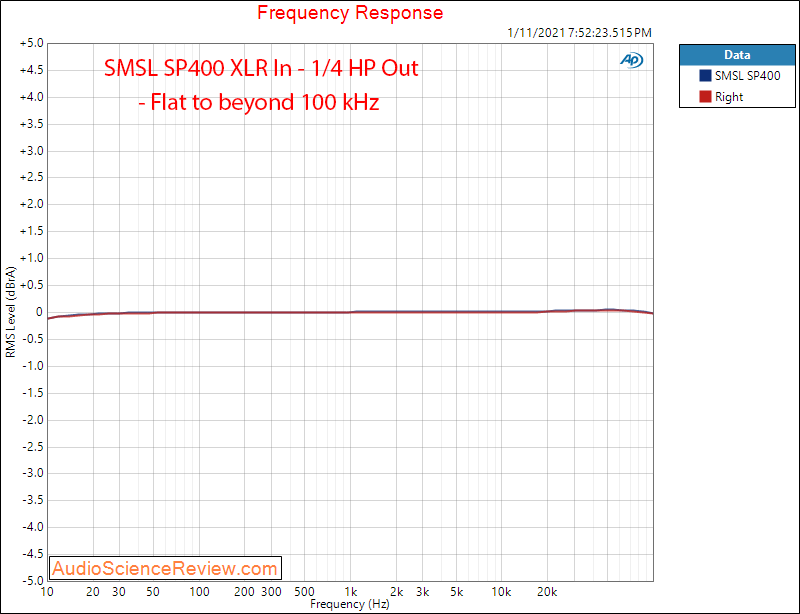 Measuring power into 300 ohm load shows that the different gain settings have almost no performance difference other than available amount of power: 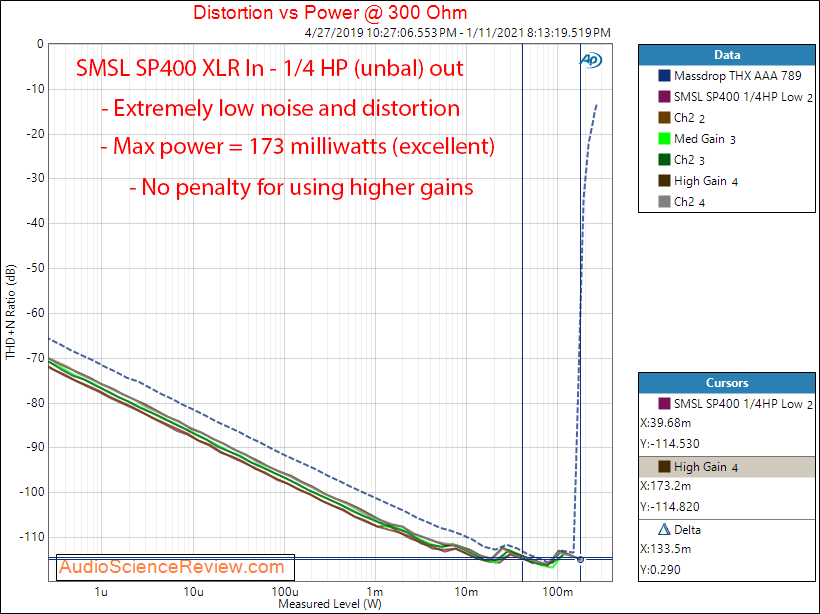 Some other amps that get the best signal to noise ratio (and SINAD) tend to have a low gain mode with better performance. Here, the three modes are almost the same so I would just use the highest gain setting and be done with it. It is not like it impacts the channel balance as you will see later.

Note that the first generation Massdrop THX 789 is bested in noise department. 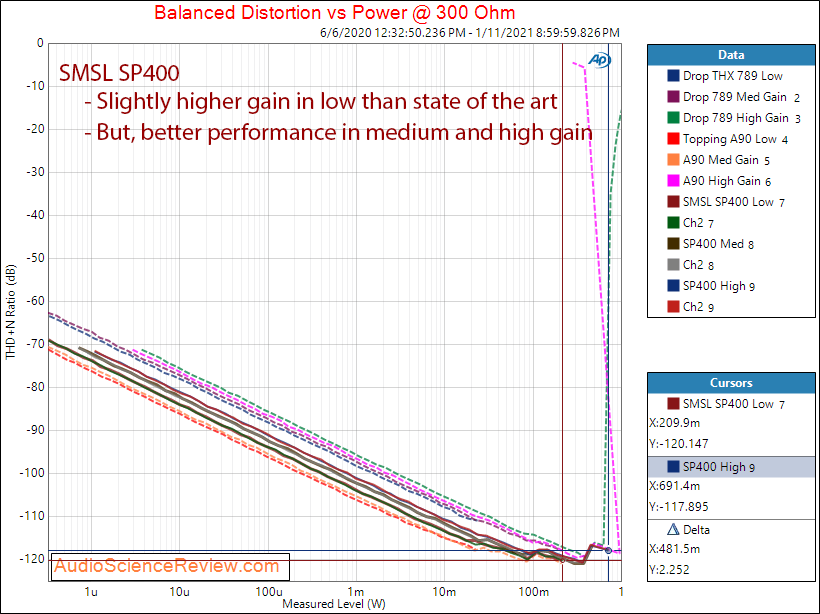 You have nearly 700 milliwatts which power just about any high impedance headphone.

Switching to 32 ohm load we get similar picture: 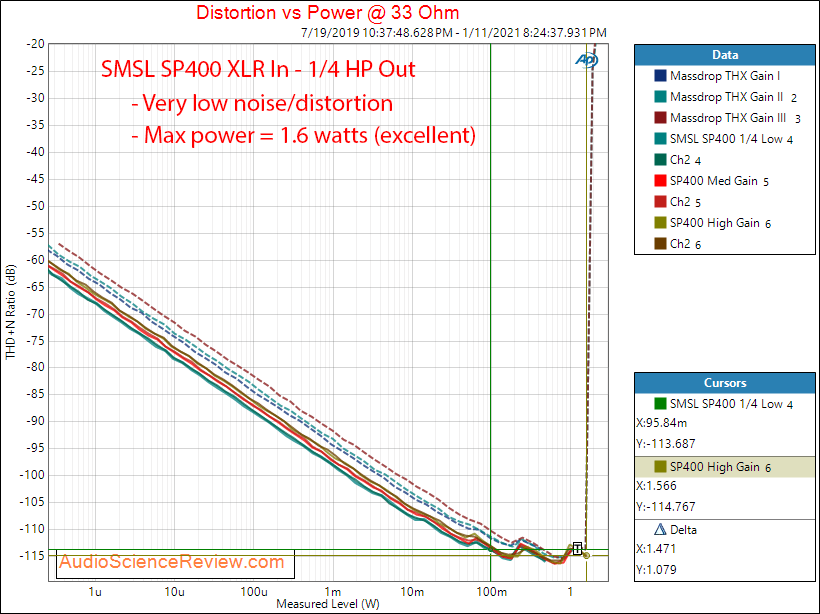 For consistency with previous tests, here is balanced not at 32 ohm but 50: 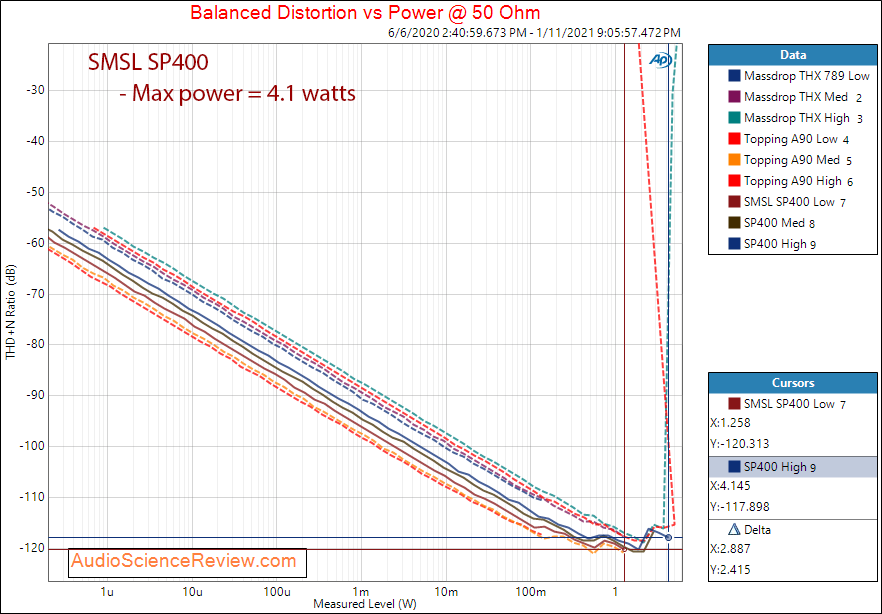 We basically have a speaker amplifier with 4 watts of power with both channels driven.

Using our latest test to check for load dependency we get: 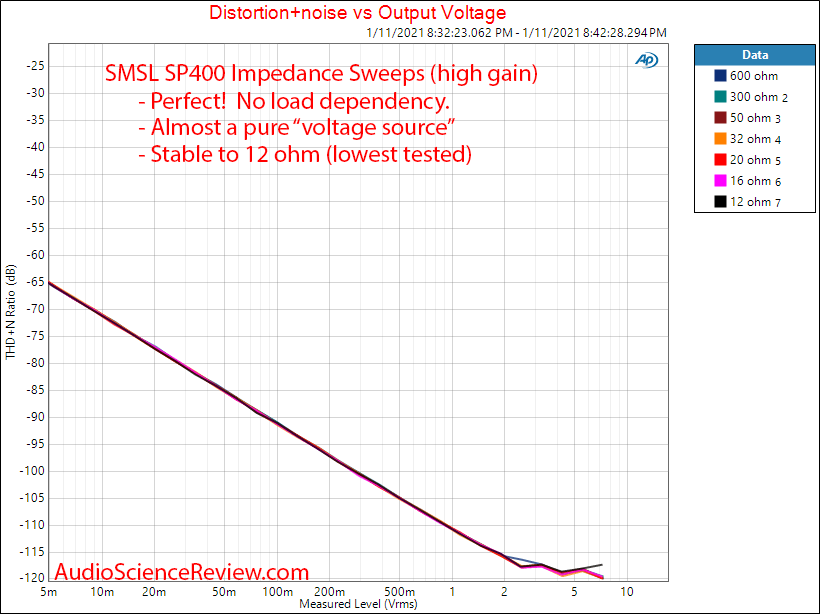 As you see, the amp does not care if the load is changed. It is happy to even drive 12 ohm load. To get the power at any of the tested impedances, simply follow the formula power=voltage * voltage/impedance.

Switching to balanced mode we of course get more power and some small signs of strain appear: 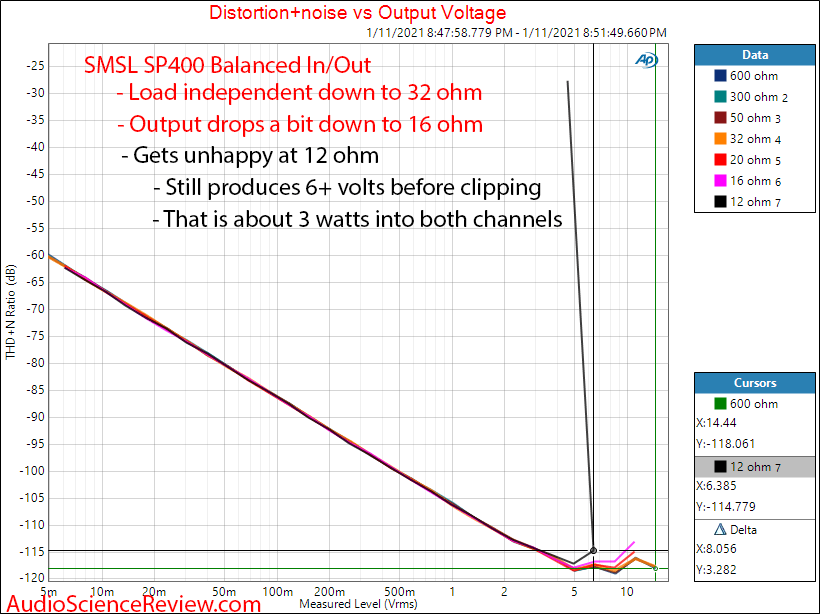 Max output is now at 14.4 volts but gets reduced below 32 ohm. At 6 volts there is finally some clipping.

Note that because there is no clipping elsewhere, the SP400 is "gain limited" meaning it could have been pushed harder. But decision was made to give you absolutely clean and transparent power to max volume.

Finally here, is our channel balance demonstrating the value of the R2R volume control: 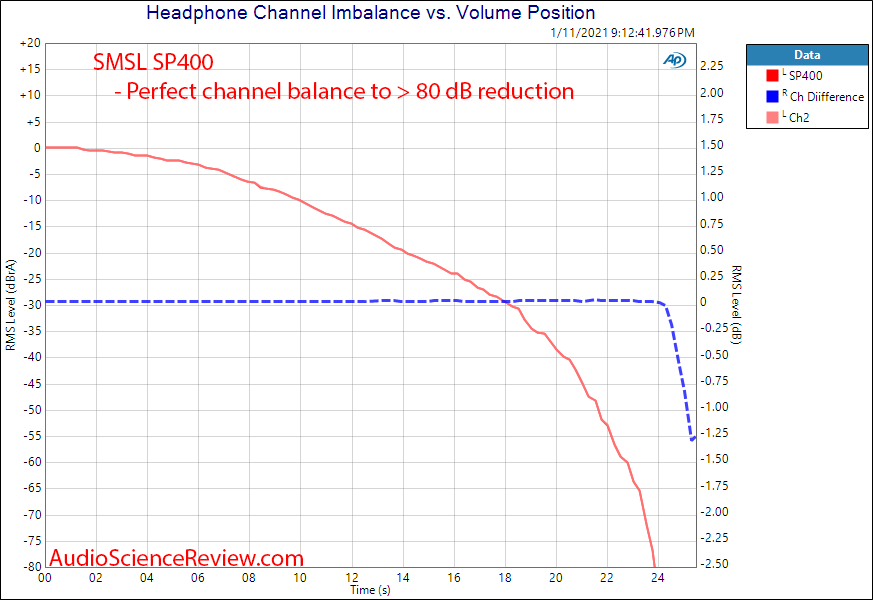 SMSL SP400 Listening Tests
As usual I started my testing with Drop Ether CX low impedance headphone. The SP400 was cruising, driving this headphone with ease to incredibly high levels, causing neuron displacement in one's brain if you are not careful! There was no hint of distortion and extremely clean bass to treble response. Switching to Sennheiser HD650 had similar results with exceptional fidelity.

I did hit a usability issue though that is common with R2R volume controls: they are slow to respond. You have to crank and crank the volume control to go from loud to average level. Wish they would add some kind of acceleration to the volume control and jump a bunch of steps when you rotate it fast.

Conclusions
We another state-of-the-art headphone amplifier in the form of SP-400 with some differentiation in the form of R2R volume control which also gives you volume control should you want to use it as pre-amp in far-field listening. More choices in instrument grade headphone amplifiers with superb fidelity and seemingly infinite power availability.

I am happy to put the SMSL SP400 on my recommended list.

We use cookies to ensure your high-speed browsing experience. By continuing to browse this site, we agree to use cookies.
Got It